Wednesday 16th March 2016 goes down as a very important day! Our first grand-child, Olivia, was born!

Also, the ATA trip took a coach-load of us (people involved in tourism) on a very informative ‘jolly’ around the SW of Anglesey.
We started the day in Menai Bridge, at the Telford Centre, whence two guides took us for a walk under the Menai Bridge, built by Thomas Telford between 1819 and 1826.

From a distance the bridge is beautiful and almost delicate. Standing under one of the huge towers and looking up, you realise the immensity of the structure. The bridge formed the first fixed connection between Anglesey and mainland Wales. Previously, people and most animals would be ferried across the Menai Strait and cattle had to swim to reach markets on the far bank.

Later, in 1850, the Britannia Bridge was completed by Robert Stephenson, in order to carry the railway across the Strait. In 1970, following fire damage to the bridge, the opportunity was taken to add a road deck, carrying the A55, to relieve the increased traffic crossing the Menai Bridge. 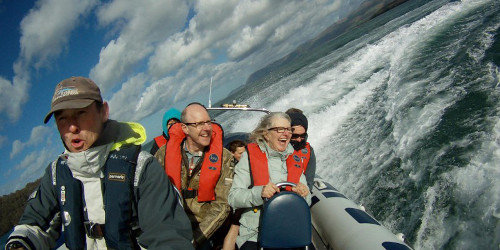 From the Bridges we walked into the centre of town for a huge treat: in groups of ten we were taken out, by skipper Charles, in one of the powerful RIBs (rigid inflatable boat) owned by Rib Ride. Once our life-jackets were on and the safety information had been delivered, we were off.

We were in totally safe hands with Charles, but our spin under the Menai Bridge and through the Swellies to Gorad Goch (an island in between the two bridges) was great excitment and we all came back to the Princes Pier buzzing and with big grins on our faces! I’m sorry there are no photos but I was too busy enjoying the experience! Thank you, Charles. Back on shore we relaxed with a coffee courtesy of Dylan’s restaurant.

Lunch was ready for us when we arrived at the Marram Grass Cafe, run by the Barrie brothers, in Newborough. You may have heard of the Marram Grass – it has been appearing on TV, winning awards and gaining much praise. Good food and good company, what more could you wish for?! 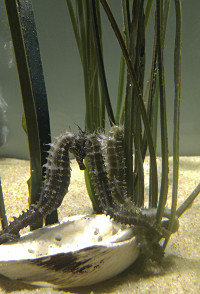 In the afternoon, the group divided so we could visit the Sea Zoo and Halen Mon which are right next door to each other. Both are well worth a visit. The Sea Zoo, apart from being a visitor attraction, is also involved in serious scientific work, studying sea-life around the British coast: they also have a breeding program, specifically with lobsters and sea-horses.

Halen Mon (Anglesey Sea Salt) is the salt of choice for many top chefs around the world and President Obama’s favourite chocolates are caramels topped with a sprinkling of Halen Mon. Salt water is pumped from the Menai Strait, cleaned and purified before going through a semi-secret process to make the salt crystals which have given Halen Mon its reputation. 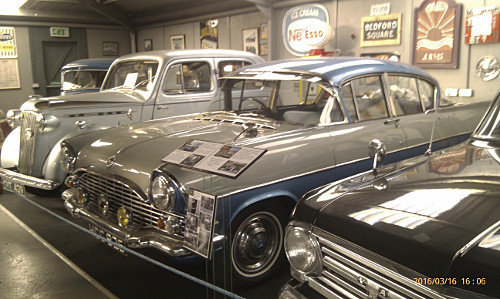 As a little extra on our day out, we were offered a visit to Tacla Taid Transport Museum. This was my first visit and I found it really interesting. There is a wide range of vehicles, many classics, all in very good working condition. Some of the vehicles are used for special occassions – weddings etc. Another place to add to wet weather cover as well as being a special interest venue.

Back to Oriel Ynys Mon to collect the car, so I decided to pop into the gallery before closing time to take a quick look at their new exhibition. I’ll be back, with Daf – there was some really interesting work, which is associated with the Open Studios week on Anglesey, but actually lasts much longer.

Thank you to everyone involved in organising the day.