As a member of the ATA I was offered the opportunity to go on a ‘coach trip’ to Mynydd Parys (Parys Mountain), Amlwch Port and the RNLI centre in Moelfre, with lunch at Lastra Farm: these visits are always interesting and very informative and the idea is that we can pass the information on to our guests. 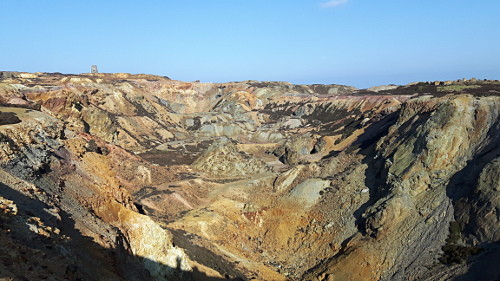 The morning didn’t start brilliantly – it rained! – but we set off for the north of Anglesey and our first stop. Mynydd Parys has a fascinating mining history stretching back about four thousand years: it is rich in minerals, especially copper, and has been mined since the Bronze Age.

The Romans were very keen to extract its metals and Queen Elizabeth I, whose Tudor ancestors came from Anglesey, sent two of her most senior advisers, Burleigh and Walsingham, to investigate Mynydd Parys. 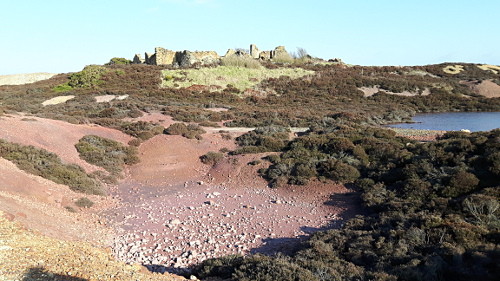 The height of activity came in the 18th century when there was a ‘copper rush’ equivalent to the Klondike gold rush, when it acquired the name ‘Copper Kingdom’. 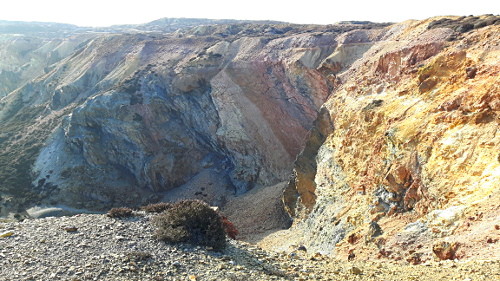 Copper was used to plate the hulls of Nelsons ships, saving them from a wood eating worm in the Med and keeping them free from barnacles and growth, thus making them faster in the water. Copper is still being mined on Mynydd Parys.

Visitors are advised not to stray from the official path but I can recommend a visit to this colourful, mineral ‘lunar landscape’.
Many thanks to David Wagstaff for sharing a lot of information with us. 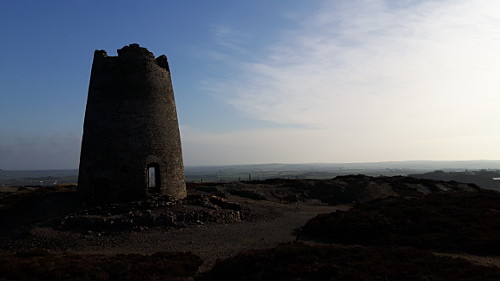 The whole of Anglesey has been designated a world-wide site of special geological interest and down at Amlwch Port, close to the museum which offers information about Parys Mountain, is Geo Mon’s centre. They are based in the port management building which goes back to the time of the ‘Copper Kingdom’. 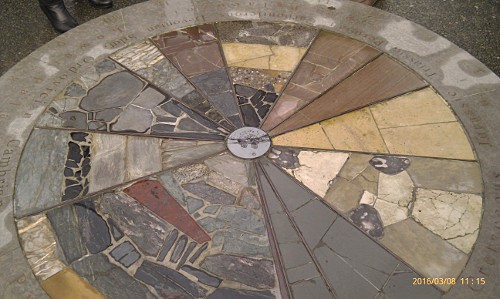 Outside is a circle set in a paved area which shows samples of all the different types of rock which make up the island. Specialists come from around the world to study Anglesey’s geology. 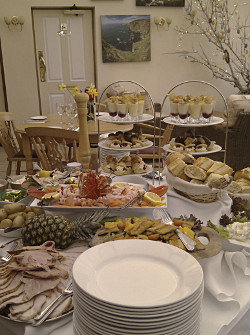 Lunch awaited us at Lastra Farm, a short drive away, and it was superb. I expected sandwiches and a cuppa but we had fish and meat platters with salads and accompaniments, followed by some very tempting desserts. It also offered an opportunity to socialise. I can heartily recommend Lastra Farm if you’re in the north east of the island.

Our final visit of the day was to the RNLI Moelfre Lifeboat Station where we were shown round by two members of the crew. The Tamar class lifeboat, ‘Kiwi’ is a superb piece of technology and kept in spotless condition and although she comes with her own RIB, carried at the stern, the station also has a ‘D class’ RIB, ‘Enfys’. 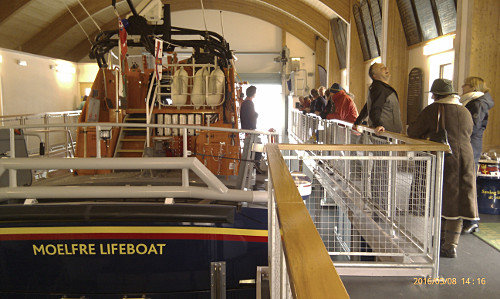 Close to the RNLI buildings are statues and monuments commemorating some of the wrecks and rescues. One statue depicts Coxwain Richard Evans who was awarded two Gold Medals.

The walk along the shore which took us to two of the wreck sites – the ‘Royal Charter’, where many died; and 100 years and a day later, the ‘Hindlea’ where everyone was saved, despite the lifeboat crew being at great risk – forms part of the Anglesey Coastal Path.

Back to the coach, driven by Nia, who had taken her vehicle through some very narrow lanes, including roadworks, during the day, and off to our cars parked in the grounds of Oriel Ynys Mon.

The whole day was very interesting and informative – thank you to everyone involved.

Next week we’ll be visiting a couple of places to the south of Anglesey and lunch will be at ‘The Marram Grass’. I can’t wait – but I’d rather it didn’t rain