The tale of our infatuation with steam trains continues with…

…the Welsh Highland narrow gauge railway running between Caernarfon and Porthmadog, where it links to the Festiniog Railway, running from Porthmadog to Blaenau Ffestiniog high in the slate mountains of Snowdonia. 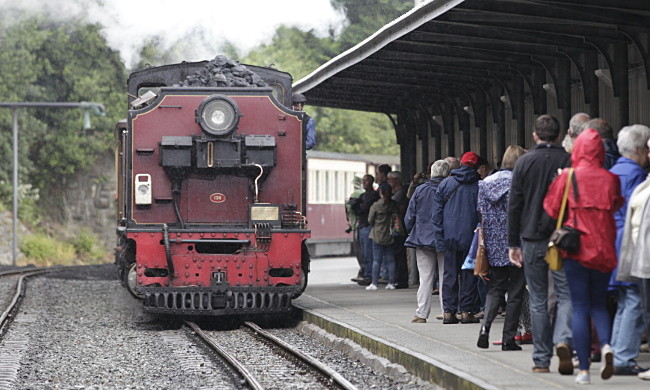 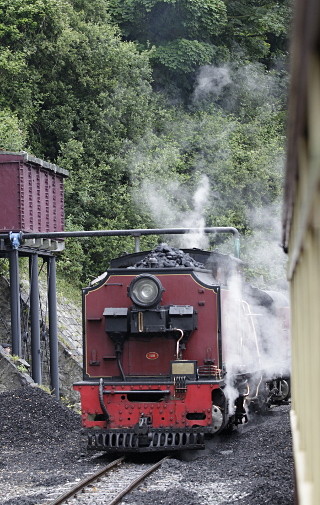 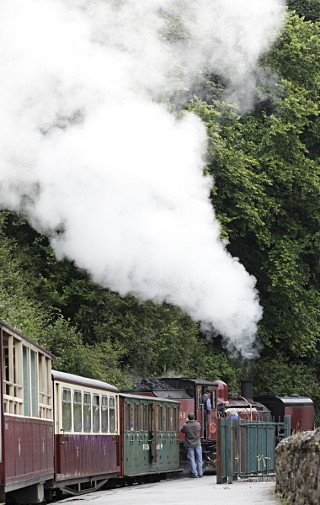 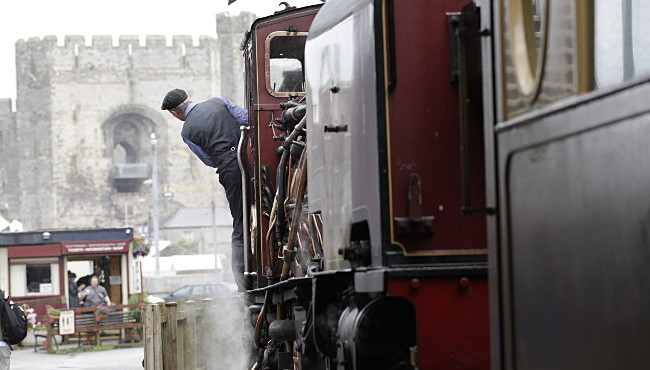 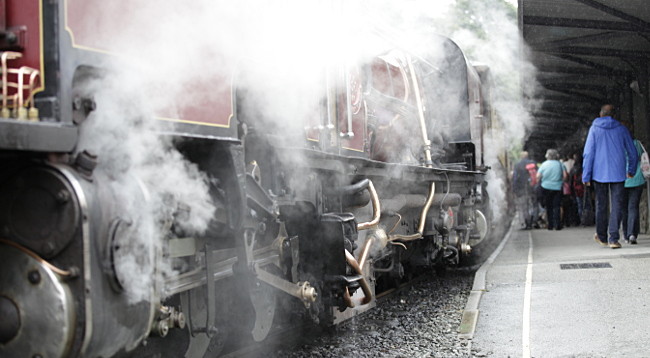 At 09:30 on Thursday 16th June we were standing on the platform with lots of others awaiting the arrival of the 10:00 steam engine which would pull the 10:00 train from Caernarfon all the way to Porthmadog passing the foot of Snowdon on the way.
When the engine pulled into the station, there was a ripple of excitement. It is, like all steam engines, a living breathing thing, a Welsh dragon come to life. 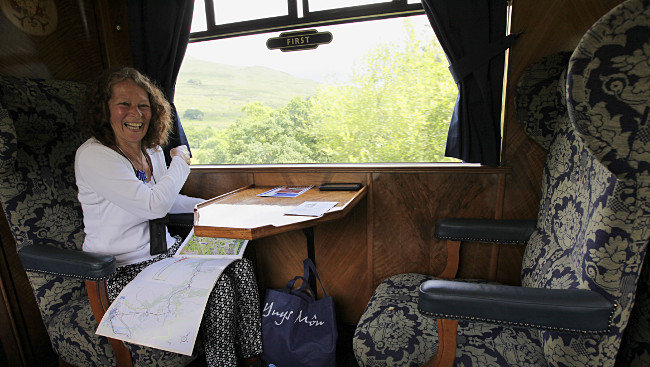 Aboard the train, I felt like an excited child on a birthday outing. As the train pulled out of the station, I looked back to watch Caernarfon Castle slipping out of sight as we puffed along the track. 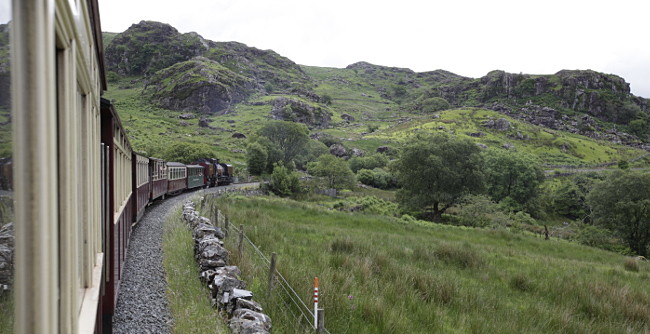 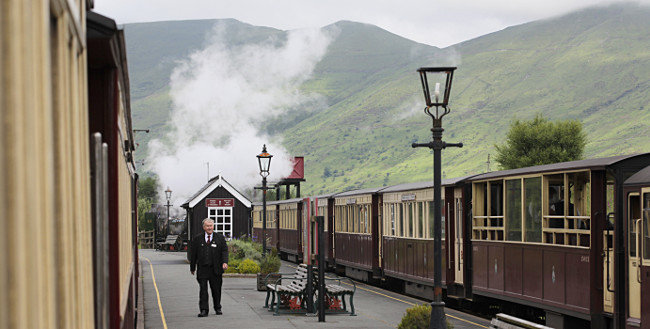 The narrow-gauge engines on the Welsh Highland Railway run on tracks two feet wide. To go round the sharp corners required to take them snaking up steep inclines, they are articulated in two places. Each steam engine is made in three parts, a central boiler with driver’s cab, a watertank and a coal bunker. 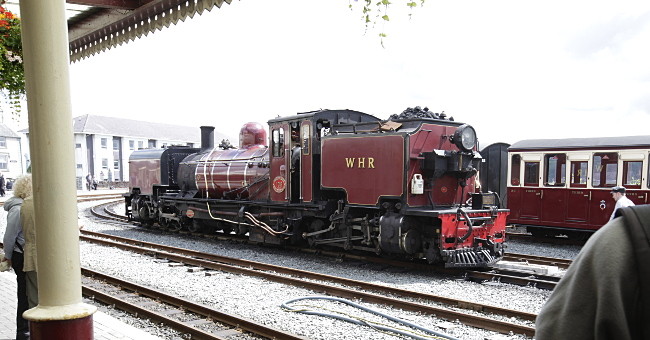 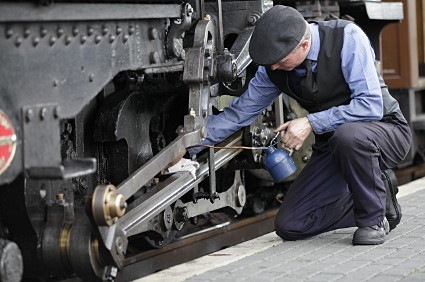 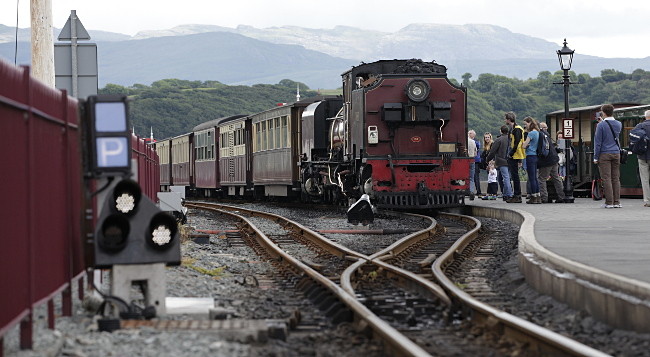 The brief history of the line between Caernarfon and Porthmadog goes back to 1864 when a tramway was built to carry slate from the mountains to the coast for export. The line was extended over time until it eventually joined up and carried both slate and passengers.
Sadly, the Welsh Highland Railway was never a financial success and in 1944 a ‘winding-up’ order was made. The company was never actually closed, so eventually, in 1989, it was possible for the Ffestiniog Railway to make a bid for the track. In 1999, they aquired the assets from the official receiver and with the aid of a Milleniun Commission grant, much fund raising, and a lot of volunteer labour, the Welsh Highland Railway was reconstructed, bit by bit, to become the wonderful entity it is now.

It is still run on volunteer labour.

Journey from Caernarfon to Porthmadog

The journey from Caernarfon to Porthmadog is 25miles long and runs through beautiful countryside. It climbs from sea level at historic Caernarfon to 197metres before descending through forests and the beautiful Aberglaslyn valley until it arrives back at sea level in Porthmadog. 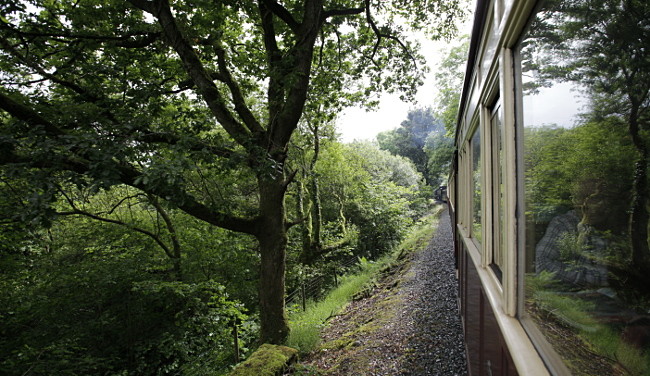 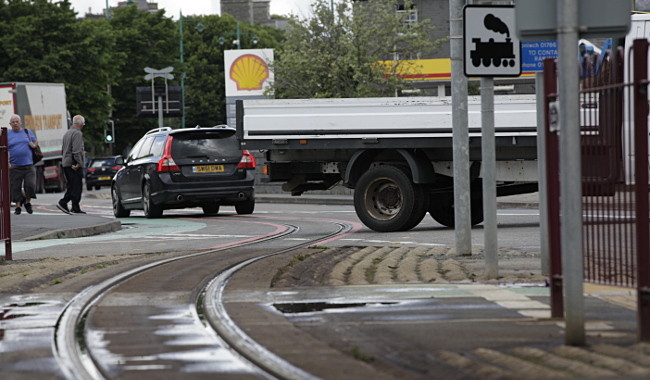 We loved every bit of our journey and can heartily recommend it to visitors. We took lots of pics and video. The best bit of the end of the end of the journey was that we could do it all again on the return journey from Porthmadog to Caernarfon!