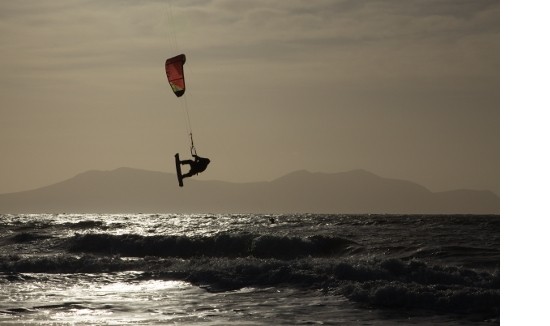 Daf and I had a lovely walk along Llanddwyn Beach in a brisk breeze and lovely sunshine the other day. It was great to get some exercise and blow away the winter cobwebs. Obviously the kite surfers felt the same way; they were out in force, their brightly coloured kites flying high and skimming them across the white capped waves. We just had to stop for a while to watch them: luckily Daf had his camera with him.

The Isle of Anglesey has been awarded European Geopark Status

On my first visit to Oriel Ynys Mon I stood in the history gallery fascinated by a relief map of the Isle of Anglesey which showed its fascinating geological structure. Huge upheavals exposing widely differing strata were evident and here lay the explanation of the environmental diversity across our Island.

Now this special geology has been recognised by the awarding of European Geopark Status. If, like me, you’d never heard of it and have no idea what it means, let me explain: a European Geopark is a clearly defined area with a number of important geological sites which are rare, aesthetically appealing and of scientific interest. They may also have cultural, archaeological and historic interest.

A superb description of Anglesey: there are beautiful examples at South Stack, Paris Mountain, Newborough and Llanddwyn and in many other places around the Island.

We have always known how diverse and beautiful Anglesey is and now we have ‘official recognition’.