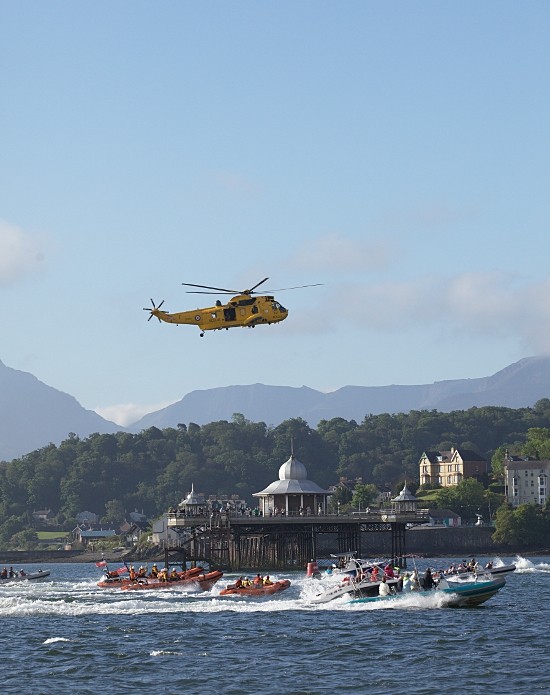 Early this morning, we walked down our lane to the shore of the Menai Strait and waited on the jetty by The Gazelle to see the Olympic Flame carried, on the Beaumaris RNLI Lifeboat, from the town of Beaumaris to Menai Bridge.

Its journey began at Beaumaris Castle; it was escorted through the town to the lifeboat station, by the root of Beaumaris Pier, where it was handed to the Lifeboat boat crew and taken aboard the station’s Atlantic 85 RIB, the Annette Mary Liddington.

The Inshore Lifeboat carrying the Olympic Torch then left bound for Menai Bridge, escorted by a flotilla of small boats, mainly RIBs, with the magnificent Sea King Air Sea Rescue helicopter from RAF Valley flying overhead like a guardian angel.

It was very moving as this mini armada powered toward us, coming from the east as the sun rose higher into a bright sky, and most exciting as it passed between where we stood on the Anglesey shore and the end of Bangor Pier, where more well-wishers stood to wave it on its way.

On arrival at Menai Bridge, the flame was carried through the town and across the beautiful Telford Suspension Bridge back to the Welsh mainland, continuing its journey to the mountains of Snowdonia where it was carried to the summit of Snowdon by the climber, Sir Chris Bonington, who travelled, for the first time, on the Snowdon Mountain Railway.

Like many other people, Daf and I watched as Prince William and Kate Middleton were married and became the Duke and Duchess of Cambridge. We saw the ceremony relayed to huge monitors at the Anglesey Showground, as the Island celebrated with festivities entitled ‘One Big Day’. I was there demonstrating Patchwork and Quilting with members of my quilt classes.

Here on Anglesey, where they live and work, I’m sure the Duke and Duchess will continue to be referred to, with affection, as William and Kate.

Kate has appeared once more, in the newspapers, coming out of Waitrose in Menai Bridge (our local supermarket). It must be very difficult trying to maintain a ‘normal existence’ while being followed everywhere by cameras: perfect hair, make-up and dress, just to pop out for a spot of shopping – sounds like hard work to me! Nice security man to help with the bags though!

At the time of the wedding we had a lovely family staying in the cottage. We always have a welcome pack: tea, coffee, milk, butter and homemade Welsh cakes waiting for guests when they arrive. This time the tables were turned: our guests left us a special present – beautifully made chocolate crispies. 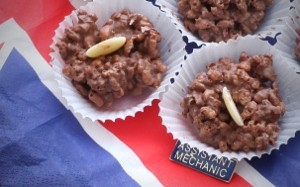 Thank you very much to Chris, Emma, Tom and Katie – they were lovely and they vanished like a magic trick, one minute they were there and the next they were gone! 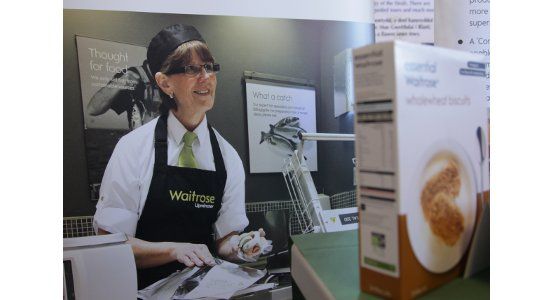 If you’re coming to Coed y Berclas for a holiday, you can do your shopping here and save the suspension and the fuel consumption on your car – we now have a wide choice of supermarkets, a farmers market (once a month), Llangefni market (twice a week ) and a selection of independent shops in Menai Bridge and Beaumaris.

There has been a little excitement hereabouts; the Co-op in Menai Bridge has closed and after fairly extensive alterations the building will soon be home to the new Waitrose in Menai Bridge. Hopefully this will reverse the shopping flow across the bridges and the mainlanders will be heading to Anglesey to divest themselves of their hard earned cash. The new store will open on Thursday 25th March 2010.

Today Daf and I went to a Waitrose promotion day which was, of course, well attended. There was lots of information and a few tasty morsels of Welsh produce to try. The new manager was there to meet and greet and we were shown a scan-it-yourself system.

It seems the new staff are being steadily absorbed into the Waitrose way of doing things and I’m assured that to be a front-line, meet the public worker there are stringent rules of engagement.

I must say, I’m looking forward to a leisurely wander through the new store and a relaxed cuppa in the new Waitrose cafe but I think I might just wait until the queues reduce a little. 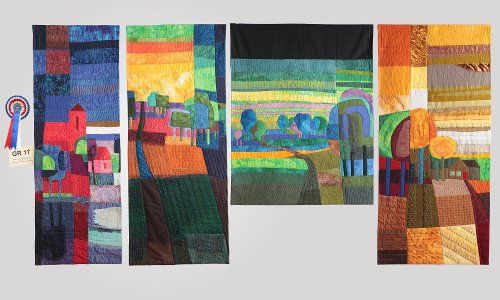 The next place to see my quilts – group and individual – is at the NEC, Birmingham, at Festival of Quilts in August; so if you’re in the area drop in to see if you can find them in probably the biggest quilt show in Europe. Later in the year I will have a quilt in The Great Northern Quilt Show which takes place in September at Harrogate Showground.

In the meantime the larger group to which we all belong, Llandygai Patchers, will be holding our own Patchwork and Quilting Show in the English Presbyterian Church in Menai Bridge, Anglesey in the first week of August – this will include some quilts made by members of my workshop series.

The next issue of the Anglesey Informer will have a two page spread about my own Patchwork and Quilting and my Workshops. It will be out in June; it’s free, and as the title suggests, it gives a lot of information about Anglesey. There is a little pile of past copies building up in our holiday Cottage. 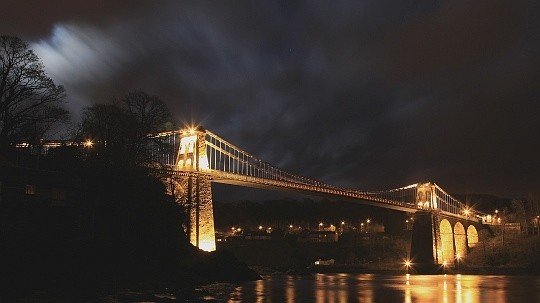